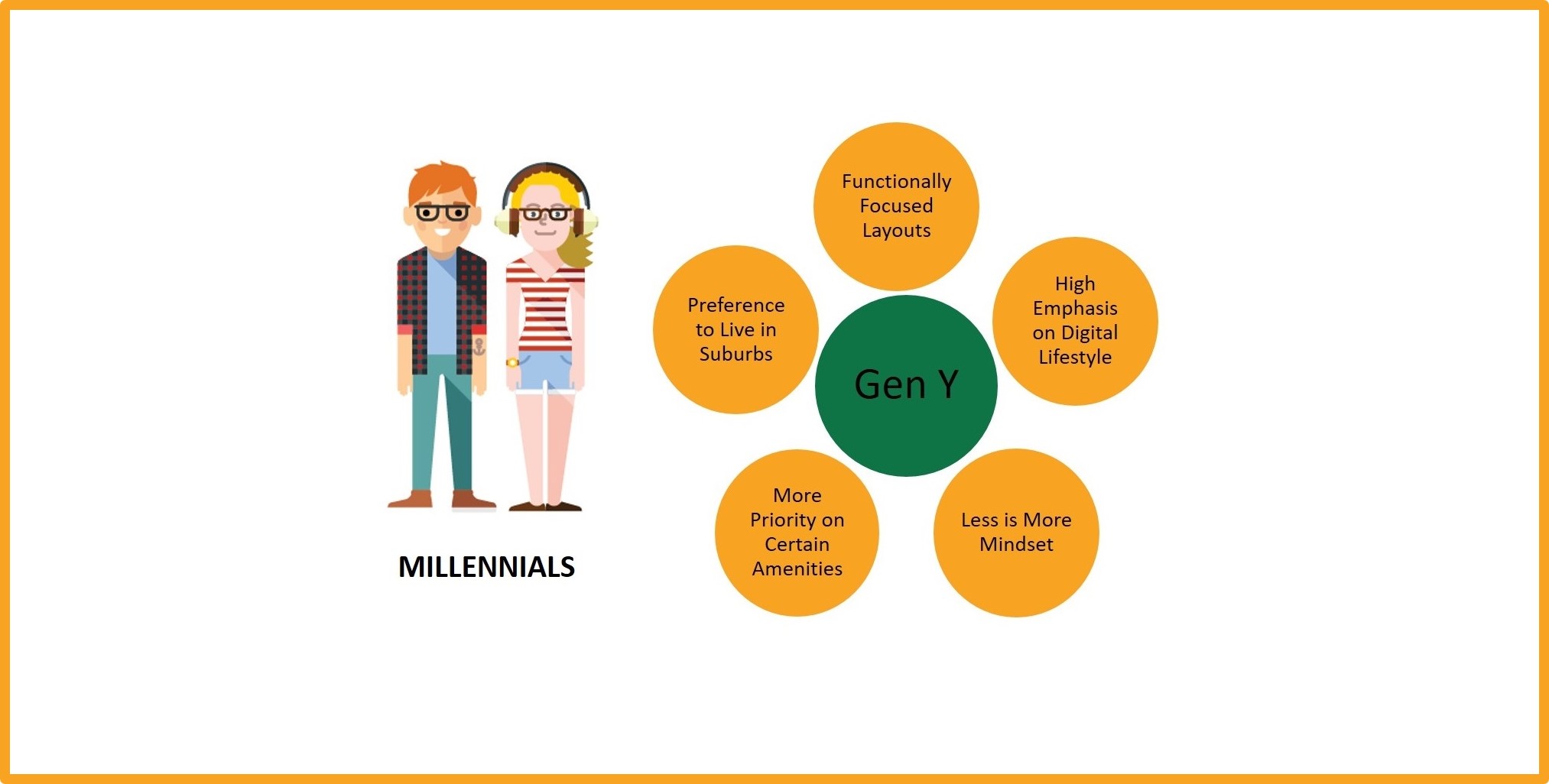 The millennial generation, or Gen Y, is considered to be anyone born between 1980 and the late 90s. The bulk of this generation has graduated college/university. They have jobs and are looking to live independently. Looking at household living patterns across the globe it is evident that Millennials prefer vertical living options for a number of reasons.

Each generation is different than the preceding one, often in surprising ways. Unlike their parents and grandparents, millennials are more comfortable living in an apartment rather than maintaining a conventional house.

Paramount Realty, a real estate company in Sri Lanka through its extensive research has identified that the demand for vertical living is gathering significant momentum among millennials and is expected to grow in the next few years. Some of the key reasons identified by Paramount Realty are as follows.

When it comes to building apartment complexes for millennials, it is important to add certain amenities into the floor plans and the layout of the entire complex. Authentic public spaces, pet-friendly options, and inviting tech-focused lobbies are among the key aspects values by millennials when selecting an apartment. Interestingly enough, one of the main reasons that drive millennials to live in an apartment is the compatibility with their lifestyle. They require access to a fitness center and a pool; spaces where health and sociability are combined. Millennials also truly value community based attributes such as access to coffee shops, food courts, and recreational areas. If these facilities are not included in the complex layout, they would at least want it to be available in close proximity.

Apartment complexes that cater to millennials should be cable, internet, and technology ready. This generation is connected to the internet 24-hours a day through their cell phones and other mobile devices and hence, technology plays an important part of their daily lives. Interestingly, around 40-50% of their decisions are influenced by social media and community platforms. Therefore, complex-wide Wi-Fi is also a plus as are lots of indoor and outdoor electrical outlets for charging mobile devices. The ability to monitor their living spaces and control various devices via mobile applications is also increasingly becoming important to millennials.

Millennials are increasingly moving towards minimalism. The decision-making patterns, lifestyle, usage of money and experiences they expect from life is rather different to the previous generation. The minimalistic lifestyle trends of millennials have made entrepreneurs and real estate developers to rethink their strategy when designing living options to cater to this segment of the market. Typically, the spending power of the millennials is less compared to the previous generation and hence, they prefer to spend on the style of life as opposed to the possessions in life. This will create a unique set of challenges and opportunities for real estate developers.

Preference to Live in Suburbs

There is an increasing trend for millennials to prefer living in suburban locations. The significant appreciation of real estate prices, increase in interest rates (cost of borrowing) and the rapid infrastructure development in the suburban areas and tier II cities are all contributing towards the millennial preference to live outside larger cities. The trend towards placing value on homeownership as opposed to renting has resulted in the increase of demand for real estate in affordable cities.

The annual PropertyGuru Asia Property Awards series has been revamped in 2017 to include categories for exciting markets such as Sri Lanka, Mongolia, Laos, India and the Maldives.

With an unparalleled reputation within the Asian real estate industry for being credible, fair and transparent, with an independent judging body, and a free-to-enter system, the prestigious Asia Property Awards grand final ceremony in Singapore will now be held over two nights at the Sands Expo and Convention Centre at Marina Bay Sands on 7-8 November 2017. The finale will also feature China, Hong Kong and Macau categories as part of the expanded programme.

In the lead up to the November ceremony, nominations are now being accepted online via AsiaPropertyAwards.com/nominations/. Developers, industry professionals, consumers and the general public can nominate until 18 August, and official entries are accepted until 25 August.

Sri Lankan real estate, which joins the Awards series in its 12th year, recently entered JLL’s Global Real Estate Transparency Index for the first time and has shown huge potential for development. The sector is supported by a stable economy with a projected 6 percent growth this year.

Country winners in Sri Lanka and other markets will advance to the seventh annual PropertyGuru Asia Property Awards grand final in Singapore to compete for regional titles and to be crowned the “best in Asia” in 2017.

“The recognition of Sime Darby Property as the Best Developer in South East Asia by such esteemed industry experts is further testament of our commitment as a trusted developer. We were very honoured to receive the award and our heartfelt appreciation goes to the organiser,” Dato’ Ir Jauhari Hamidi, managing director at Sime Darby Property, said in a press statement in November 2016.

Every stage of the awards programme – from nominations to site visits and judges’ deliberations – is strictly supervised by BDO, one of the world’s largest auditing and accountancy firms with operations in more than 130 countries and territories. BDO has been the official supervisor of the Awards for more than a decade.

“It has been an exciting journey for the Asia Property Awards after joining PropertyGuru in 2016,” said Terry Blackburn, founder and managing director of the Awards. “Our expanded awards scheme is a tribute to the strength of the Asian real estate industry. Fair judgement and transparency of process are at the heart of the Awards and we’re delighted to introduce the awards system to Asia’s rapidly growing property markets.”

He added: “For more than a decade we’ve had incredible support from various developers, who have been instrumental in the growth of the property sector. As we explore new countries for the platform, we will ensure that the PropertyGuru Asia Property Awards truly is the region’s benchmark for the finest real estate developers, developments and design in the region.”

Hari V. Krishnan, CEO of PropertyGuru Group, said: “Because of the Asia Property Awards, consumers are empowered to make confident property decisions, whether they’re first-time buyers, expat renters or serial investors. Property knowledge is essential in our culture at PropertyGuru. We wish the country winners the best as they advance to compete at our grand final in Singapore.”

First launched in 2005 by Ensign Media in Thailand, the Awards system also holds annual black-tie gala dinner events in Cambodia, the Philippines, Vietnam, Myanmar, Malaysia and Indonesia, playing host to up to 600 C-level executives, senior industry figures and VIPs at each event.

Following the format of the country awards, Sri Lanka categories are divided into three sections: Developer, Development, and Design. All eligible nominations are rigorously and fairly judged by the panels of experts, based on the most detailed and fairest criteria:

New regional categories to join the 2017 Awards include Best Mixed Use Development (Asia). While the award was presented in select country ceremonies last year (Singapore, Malaysia, China, Hong Kong/Macau), it will be the first time that a regional winner will be named.

Another new category is Best Universal Design Development (Asia), which is open to residential and commercial developments across the region that will be shortlisted in any category at the country awards. The project must be built environment that can be accessed, understood and used to the greatest extent possible by all people regardless of their age, size, ability or disability.

Overall, there will be seven Design, eight Development and two Developer categories at the grand finale ceremony, which will be preceded by an official shortlist announcement in early October.

The two gala events in Singapore will each begin with a two-hour international networking cocktail reception, followed by the opening remarks and speeches, four-course dinner, and the awards ceremony proper. The first night on 7 November focuses on Singapore categories, and the second night on 8 November features the new markets and the regional competition. Alongside the gala dinner, PropertyGuru’s C-suite conference – the two-day Singapore Real Estate Summit 2017 – will be held at the same venue in the daytime.